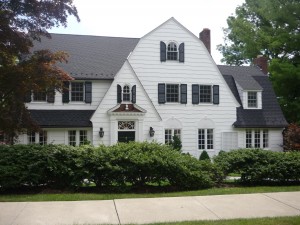 The Dutch Colonial Revival style is distinguished by its gambrel roof, with or without flared eaves, and the frequent use of dormers.

It was built from about 1890 to 1930 in various forms.  After 1900, more classical elements began to predominate. The gambrel style allowed an almost complete second floor without the expense of two-story construction. Far from being a mere legend, the original Colonial style with a gambrel roof became popular during the last part of the 1700s because they were less expensive to build and avoided the pitfall of being taxed as a two-story house. The Federal Direct Tax records of 1798 shows that gambrel-roofed houses were classified as one story. What a bargain!

In addition to many Colonial Revival characteristics, the following were common to the Dutch Colonial: