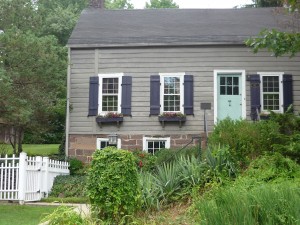 The design of the farmhouse — also called “folk” houses — was initially influenced by geography. The style evolved from the characteristics of the place, people, climate and materials available in the particular region where it was located. The earliest homes that we can call true farmhouses were those built by early colonial families of the 1700s. The owners would likely have built the homes themselves, as opposed to hiring an architect to do the job. Architects were for the wealthy, and skilled labor was either limited or unaffordable.

Once the railroads could travel cross-country by the mid-19th century, it became possible for materials to be transported from elsewhere. That opened the door for the farmhouse to take on many different personalities.

Houses that once may have been built out of mud, stone or logs could now be built with lumber, brick and quarried stone. Because people with common backgrounds settled together, German immigrants, for one, might have masonry skills. So the houses in that area would have more brick than in other areas. The farmhouse was a very practical style.

Another interesting characteristic that developed because of this new accessibility to materials is that the wealthier landowner often adopted styling that was popular at the time. This is why you’ll see such homes listed with double monikers. Two of those styles, many of them built in the mid- to late-1800s and early 1900s, can still be found mostly along the East Coast and throughout the Midwest. An early 1900s farmhouse, for example, sporting a long wraparound porch with Queen Anne posts and railings is referred to as a Queen Anne farmhouse. One with the Greek columns popular in the mid-1800s might be known as a Greek Revival farmhouse.

By then, pattern books were available, and landowners could pick a style they liked and buy the materials to build it. The process was what we now call eclectic; it was mix and match all the way, even with color.

The commonality was this: The farmhouse was always unpretentious, straightforward and functional.