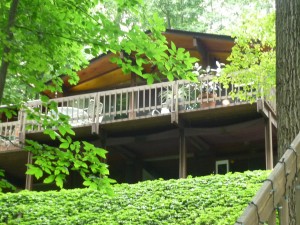 Mid-Century Modern is sometimes referred to as Post-War Modern. That is, after World War II. Then, the United States was experiencing an unprecedented housing boom. Familiar structures such as the manufactured home, rambler, split-level, and A-frame were built by the millions. New development projects used the burgeoning road system to connect the city centers to the expanding suburbs. These new houses were roomier and better constructed because of new building methods and the use of power tools.

At the same time, forward-thinking developers like Joseph Eichler called upon architects known for their innovative designs in an effort to bring modernism to the masses who were buying these new homes. Although modernism itself wasn’t new, introducing its design elements to the general home buyer was. The idea of modernism and looking to the future through architectural design flourished for a period of time, especially on the West coast. Even architects like Frank Lloyd Wright, famous for more pricey custom homes, experimented with modest sized modern designs. Some of his Usonian homes are great examples.

One might be inclined to refer to such a home as Retro-Modern or having a Jetsons Factor. Although the atomic-age style (the use of space age shapes like rockets & atoms ) can often be found in mid-century modern homes (usually in the form of light fixtures, appliances, furniture, clocks, etc), they’re not necessarily what make the home modern. Replace those items with today’s equivalents, and a great modern design will appear timeless underneath.