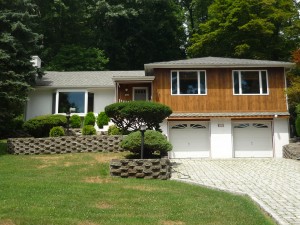 Split-level type homes, sometimes called raised ranches, emerged as a popular variant of the ranch style during the third quarter of the 20th century. Earlier, uncommon examples predate World War II. The Sears catalog of Honor-Bilt Homes have several models that exhibit many of the interior characteristics of the split level. Examples include the Normandy, Homestead, Homecrest, and Franklin models sporting exterior styling popular during the 1930s.

Unlike ranches, the split-level was innovative in its use of interior space. Instead of arranging rooms on one or two floors, the split reorganized space according to use. In one standard split-level variant, the entry, kitchen, dining room, and living area were on the main level. A half staircase often led to the bedrooms upstairs and another adjacent half staircase led to a family room (also called the rumpus room) as well as laundry area and possibly a guest room downstairs. Alternately, a garage might be housed in the lower level with easy access to the main level via the half staircase. Another option was the split-entry home, which was characterized by a small entry with a half staircase leading to the living area and bedrooms upstairs and an adjacent staircase leading down to a family room, laundry, and garage configuration. There were many other variations as well.

The popularity of the split-level derived in part from its modern layout and differentiation from more traditional housing styles of the mid-century such as the minimal traditional, Colonial Revival, Cape Cods, and bungalow-style cottages. Split-levels maximized their curbside presence, square footage, and minimized costs without requiring larger lots and full basements. The style provided the ideal balance between the builders’ goal of making a profit and buyers’ goal of getting as much house as possible for the money.