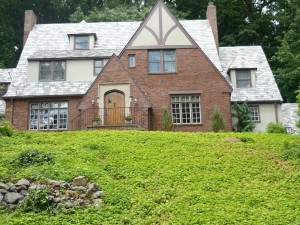 The Tudor and English Cottage style is notable for its steeply pitched, cross-gabled roof. Decorative half-timbering is common in the gable and second story. The windows are relatively tall and slender with multi-pane glazing separated by either wood or lead muntins. Chimneys are very large and commonly decorated with ornate chimney pots.

Several different siding treatments are common including brick, stucco, stone, and wood shingle or clapboard. On the balloon framework of the 20th century, brick was particularly popular and various siding combinations are commonly seen.

Roofs are found in most roofing materials, often slate, but the most interesting variation is the false thatched roof where the roofing material is rolled around the eaves. The effect created is very charming and effectively mimics the thatched roofs of English country cottages. Less common is the parapeted gable.

Windows, another distinctive feature, are often casement types opening out as well as the more common double-hung window. Multiple windows are arranged in ribbons across the façade. Sashes are multi-paned with lead or wood muntins.

Typically, Tudor or English Cottage style homes have a combination of the following characteristics: