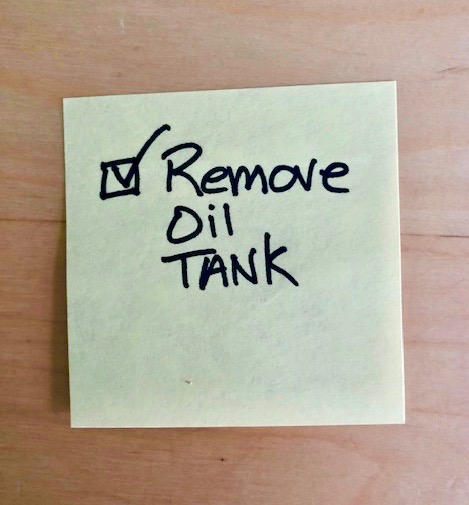 I was talking to a potential client – someone who wants to sell next year – about how to get her home ready for sale. She was surprised when I advised her to remove her underground oil tank. “It was decommissioned,” she said. “I have the paperwork.”

The problem with underground oil tanks has always been soil contamination, which is a big risk whether your tank is active or inactive. And mortgage underwriters no longer want to take that risk. In the past, you could do some soil testing around the tank and then decommission it, which entails cutting into the top, vacuuming out all the sludge, and filling it back up with sand or foam. However, if there’s a leak – even a small one – on the underside of the tank, it’s nearly impossible to test for. So, it has become common practice to have the tank removed altogether.

Active tanks carry special insurance, which can typically be transferred to the new owner. However, if a buyer is planning to convert to gas, there are complexities with oil tank insurance, usually requiring the owner to take an intermediate step of switching to an inside tank.

Oil tank removal itself is not usually complicated but, for many reasons, it can be stressful. Your yard will be dug up, which means replanting and restoring the area once the tank is removed. Beyond that, if there has been a leak, the soil must be remediated, and that can be an extremely expensive process as well as a lengthy one, as the Department of Environmental Protection must get involved.

Tank removal starts with a quote from a tank removal/remediation company. Some companies offer “a la carte” service. They’ll remove the tank for $2,000, but if a leak is found, you must pay to remove all contaminated soil. In other cases, you can pay a flat rate – maybe $12,000 – and in the event of a leak, the company assumes the cost of all soil removal.

If all goes smoothly, the removal itself – including securing permits – can be done within a few weeks. (In addition to any landscaping work, the homeowner may be responsible for any permit fees.) But if it is not smooth, remediation can take months – and sometimes over a year – so you want that over and done with before you put your house on the market.

My advice is always to do it sooner rather than later.

If you want to talk about oil tanks, or anything else you may want to take care of in preparation for a future sale, please give me a call!